Kyoto Station was opened in 1997, but many of the local people don’t like it, think it doesn’t match traditional Kyoto. Anyway, it is huge, and lots of trains coming all the time, I think bullet train every 5 minutes! There are always lots of tourists around the station, and of course inside the station has lots and lots of shops, restaurants, department stores, and more!

From Kyoto Station you can go in all directions!

There is a subway station, Kujo Station, about 6min walk from the house. It is one stop from Kyoto Station on the Karasuma Line. It is convenient for catching a train to Nara. 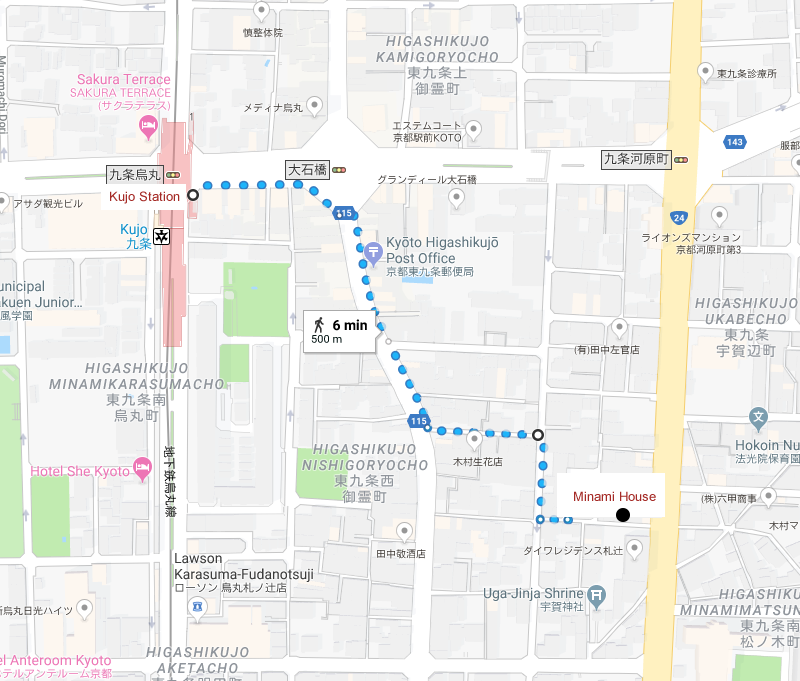 There are some bus stops nearby. The nearest and most convenient bus stop is KUJO-KAWARAMACHI Bus Stop. About 5min walk from your stay. 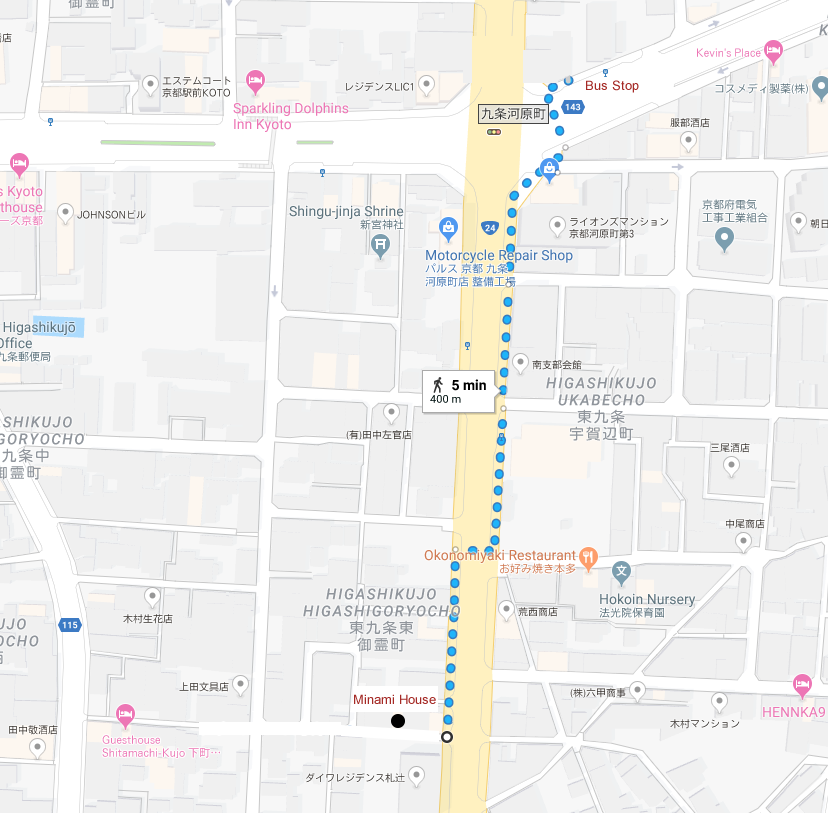 Kyoto’s bus system has route numbering system, you can find easily the bus you want to ride 🙂

For good information on public transport in Kyoto, visit this website:
http://muncity.blogspot.com.au/2013/09/getting-around-kyoto-kyoto-city-bus.html

The riding conditions in Kyoto are very convenient. There are many bike tracks, especially along the river that can take you to many sightseeing spots.
Usually each temple has some bike parking spots, sometimes free and sometimes small fee of Y100 or Y200 yen.
When you come to Kyoto I can tell you about some bike routes that I like. I will show you map : )
About bike parking:
Here is Kyoto City’s website showing bike parks. Although there is more parking area at each temples and shops, this website might be helpful;
https://kyoto-bicycle.com/parking

If you are really ambitious, here is cycling information to Nara:
Kyoto to Nara 京都八幡木津自転車道線

Fushimi Inari Shrine is the #1 tourist attraction in Kyoto. It is famous for the thousands of red “torii” gates that wind up the mountainside. 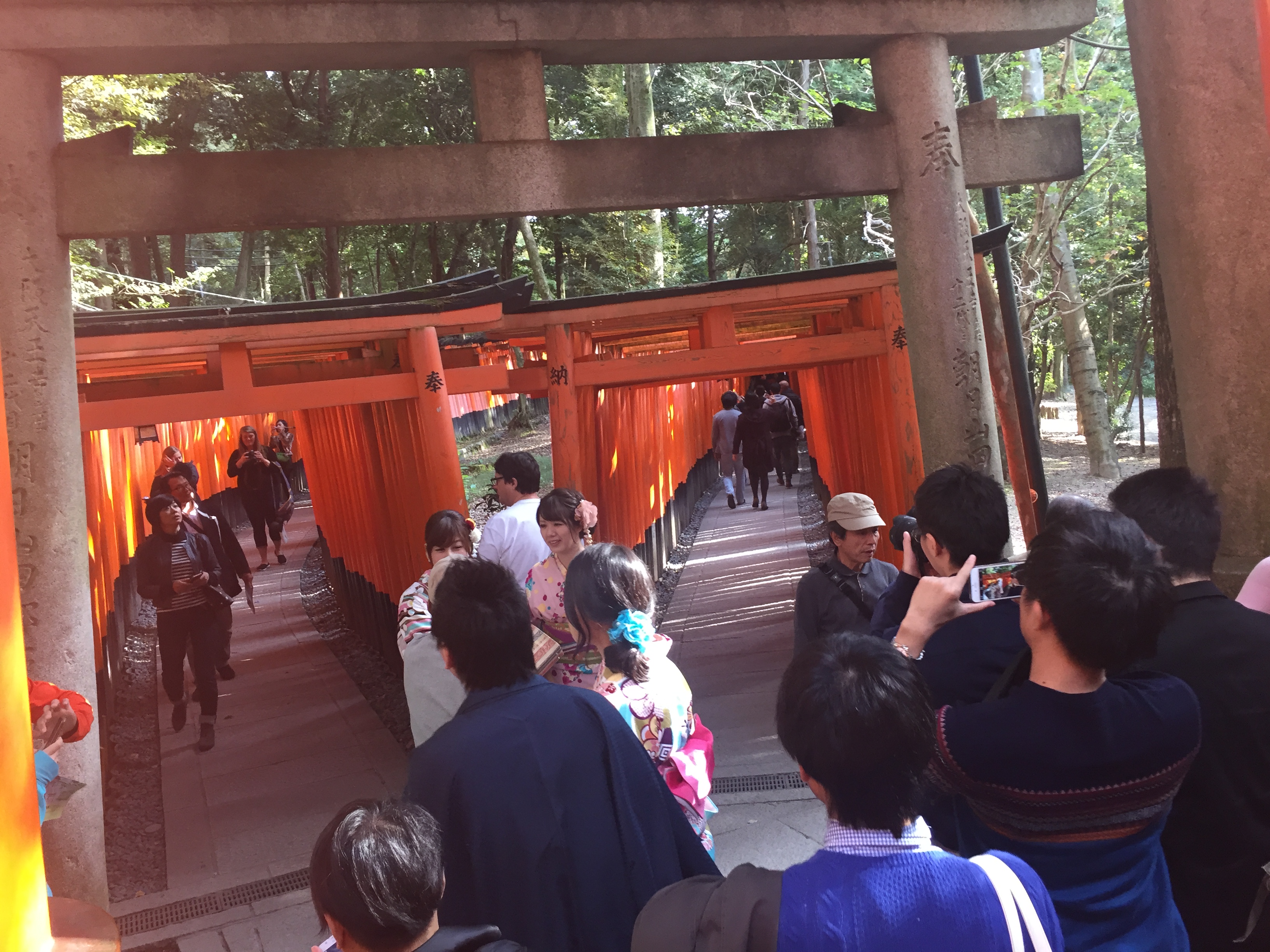 To ride/walk to Fushimi Inari Shrine from your house:

Head east from the house.

Turn left at first major intersection and go over the bridge.

Go over the train tracks.

Turn right at T intersection. It is a one-way street, but it is ok to ride your bicycle along the side.

You will see the main Fushimi Inari shopping street on your left.

Push your bikes past the shops, and there is bike parking on the right behind the car park wall. 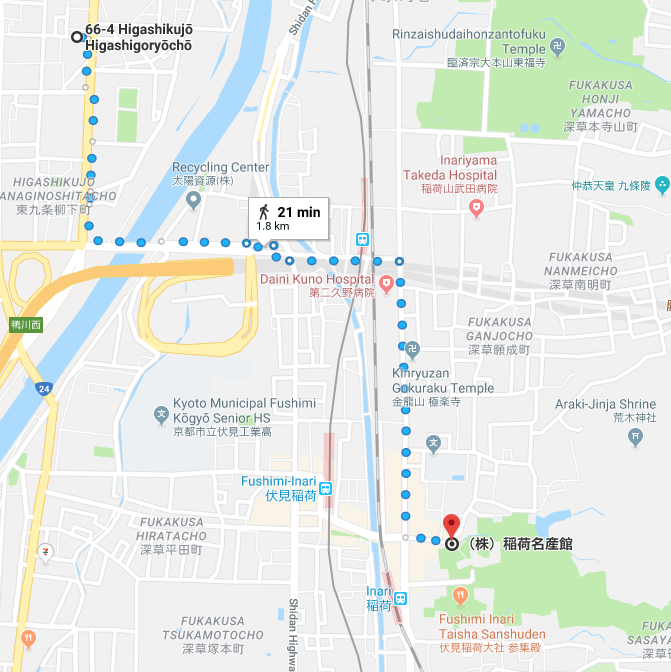 Fushimi Inari Shrine (伏見稲荷大社, Fushimi Inari Taisha) is an important Shinto shrine in southern Kyoto. It is famous for its thousands of vermilion torii gates, which straddle a network of trails behind its main buildings. The trails lead into the wooded forest of the sacred Mount Inari, which stands at 233 meters and belongs to the shrine grounds.

At the very back of the shrine’s main grounds is the entrance to the torii gate covered hiking trail, which starts with two dense, parallel rows of gates called Senbon Torii (“thousands of torii gates”). The torii gates along the entire trail are donations by individuals and companies, and you will find the donator’s name and the date of the donation inscribed on the back of each gate.

The hike to the summit of the mountain and back takes about 2 hours, however, visitors are free to walk just as far as they wish before turning back. More info at Japan Guide.

Tofukuji (東福寺, Tōfukuji) is a large Zen temple in southeastern Kyoto that is particularly famous for its spectacular autumn colors. The temple was founded in 1236 at the behest of the powerful Fujiwara clan. Its name is a combination of the names of two great temples in Nara that were also associated with the Fujiwara, Todaiji Temple and Kofukuji Temple. Tofukuji has historically been one of the principal Zen temples in Kyoto, and is a head temple of one of the schools of the Rinzai sect of Zen Buddhism.

In autumn, people come from all over Japan to see Tofukuji’s autumn colors. The most popular view is of the Tsutenkyo Bridge, which spans a valley of lush maple trees. The view from the bridge is equally spectacular, and the 100 meter long, covered walkway becomes extremely crowded when the colors reach their peak, usually around mid to late November. More info at Japan Guide.

The Kondo Hall, one of Toji’s original structures, is the temple’s main hall and largest building. Destroyed by a large fire in 1486, the building was reconstructed in the early Edo Period in a contemporary architecture style and houses Toji’s main object of worship, a large wooden statue of the Yakushi Buddha, flanked by his two attendants, the Nikko and Gakko Bodhisattvas.

Just next door stands the Kodo Hall, which was added in 825 by Kobo Daishi and served as the temple’s lecture hall. It too burned down in the 1486 fire, and was subsequently rebuilt in its original architectural style. The Kodo Hall houses 19 statues imported by Kobo Daishi from China, which are arranged according to a mandala with Dainichi Buddha (Vairocana) at the center, surrounded by buddhas, bodhisattvas and the fearful and guardian kings.

Across from the Kondo and Kodo stands Toji’s five storied pagoda, which was originally erected by Kobo Daishi in 826. It stands 57 meters tall, making it the tallest pagoda in Japan, and has become a symbol of both the temple and Kyoto as it can be seen from many places across the city. The ground floor of the pagoda is irregularly opened to the public and houses four smaller Buddha statues. More info at Japan Guide.

Sanjusangendo (三十三間堂, Sanjūsangendō) is the popular name for Rengeo-in, a temple in eastern Kyoto which is famous for its 1001 statues of Kannon, the goddess of mercy. The temple was founded in 1164 and rebuilt a century later after the original structure had been destroyed in a fire.

The temple hall is with 120 meters Japan’s longest wooden structure. The name Sanjusangendo (literally “33 intervals”) derives from the number of intervals between the building’s support columns, a traditional method of measuring the size of a building. In the center of the main hall sits a large, wooden statue of a 1000-armed Kannon (Senju Kannon) that is flanked on each side by 500 statues of human sized 1000-armed Kannon standing in ten rows. Together they make for an awesome sight.

1000-armed Kannon are equipped with 11 heads to better witness the suffering of humans and with 1000 arms to better help them fight the suffering. Note that the actual statues have only 42 arms each. Subtract the two regular arms and multiply by the 25 planes of existence to get the full thousand. More info at Japan Guide.

Standing 131 meters tall just across Kyoto Station, Kyoto Tower (京都タワー) is Kyoto’s tallest building and a rare modern iconic landmark in the city famous for its ancient temples and shrines. The tower was completed in 1964, the same year as the opening of the shinkansen and the Tokyo Olympics.

A viewing platform is located 100 meters above ground and affords a 360 degree view of Kyoto and as far as Osaka on clear days. Kyoto Tower stands on top of a typical commercial building, which contains souvenir shops, restaurants and a hotel, as well as a public bath in the basement. More info at Japan Guide.

This is a map of th local area, please explore!